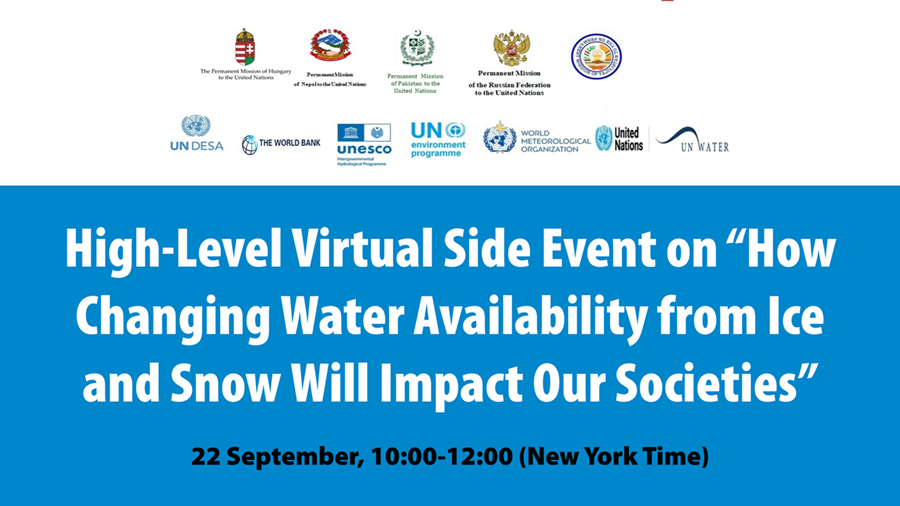 This collection accommodates the video clips from the High Level Virtual Side Event on How Changing Water Availability from Ice and Snow Will Impact Our Societies, which was organized online on September 22, 2021.

Roberto Ranzi, Chair of IAHR's Technical Committee on Climate Change Adaptation, gave a talk at the event with the following summary of statements, which was also delivered at the 76th UNGA - HLSE on the Cryosphere:

Below are some texts taken from the concept note of this event:

Glaciers, ice and snow hold 70% of the earth's freshwater resources. Climate change has accelerated the melting of the cryosphere worldwide and impacts the snow regime. Glaciers worldwide are on a retreat. This has lead to a change in the hydrological regime of rivers, characterized by the large amount of water flow, mudflows and floods in the spring months and lack of water and droughts in the summer months. Globally, 90% of disasters have been caused by mudflows, floods, storms, droughts, and other weather-related events, which continue to intensify with climate change. The recently released IPCC’s Sixth Assessment Report (August 2021) highlights that mountain and polar glaciers are melting for decades and permafrost thaw is irreversible at centennial timescale. The IPCC report also emphasizes that “climate change is intensifying the water cycle” which will bring more associated flooding and drought in many regions. 2.3 billion people live in water-stressed countries, of which 733 million live in high and critically water-stressed countries. In many places around the world, mudflows, floods and droughts will become more severe. In the mid to long term, available water from the cryosphere will become less and less and significantly impact our economies as well as the environment we live in.

UN World Water Development Report 2020 emphasizes that water is the “climate connector” that allows for greater collaboration and coordination across the majority of targets for climate change (Paris Agreement), sustainable development (2030 Agenda and its SDGs), and disaster risk reduction (Sendai Framework).Taking into account the close interlinkages between climate change and water issues and to catalyze a more integrated water and climate policy agenda, a High-level Advisory Panel entitled “Water and Climate Leaders” has been established by WMO and UN-Water, which will provide strategic guidance on integrating water and climate agendas at the highest level. At the inaugural meeting of the Water and Climate Leaders, Member of the Panel, President of the Republic of Tajikistan, H.E. Emomali Rahmon, proposed to declare 2025 as an International Year of Glaciers Preservation, which is expected to give impetus to a new global movement to take the necessary concerted action and to protect glaciers from intense melting and disappearance.

The side event will highlight the interlinkages between climate change, the cryosphere and our dependency on water to live as well as our vulnerability to water-related disasters and how water plays a pivotal role for adaptation to and mitigation of climate change impacts. It brings together high-level policymakers and stakeholders from the agricultural, energy and disaster risk reduction sectors.